Quiche has got to be the easiest, cheapest, most adaptable go-to meal ever. After its simple base, you just go with what you like in the fridge or freezer or pantry, within reason.

Remember, though, that fresh ingredients like onions and mushrooms , as well as raw meats, should be sauteed before incorporating to ensure they are fully cooked and at their tastiest. 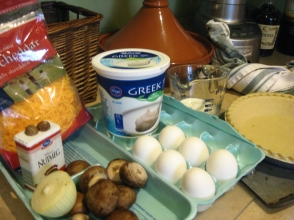 Other ingredients – (your choice, cooked to about 1/2 cup)

Preheat oven to 350 degrees. Take fork and repeatedly pierce bottom of nearly thawed pie crust in its pan. (Generally, this is to prevent the bottom from rising up. If it does just a little, don’t worry about it.) 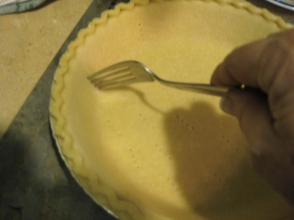 Place crust-pan on baking sheet, bake 10 mins. Remove from oven and sprinkle half of shredded cheese on bottom of crust. 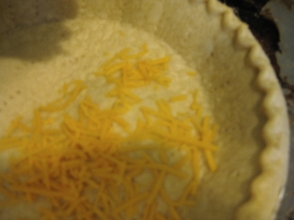 If you have chosen ingredients that need sautéing (which means to mostly cook them), add a little olive oil to your sauté pan and do that while the crust-pan is baking. 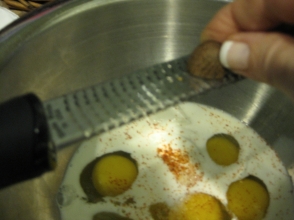 Pour egg mixture into prepared crust. Then, carefully drop other ingredients into the egg-crust to ensure the filling goodies are evenly distributed. (I’ve done this goodies first, then poured in egg mix. Usually, the egg mix scatters the goodies randomly and messes up your efforts to make sure they are distributed evenly through the quiche.) 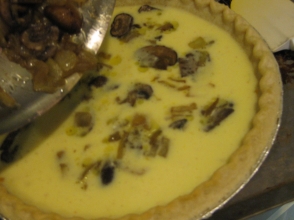 Top with rest of grated cheese. (Be careful sliding the pie on the baking sheet into the oven. You don’t want the filling to “slop” around.) 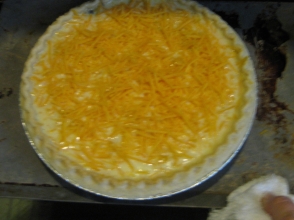 Bake 30 mins. Check to see if the middle “quivers” when you shake baking sheet slightly. If it does, cook another 5-10 mins. It should have puffed up nicely with a golden top, though it’s likely to deflate slightly by the time it’s cool enough to eat. 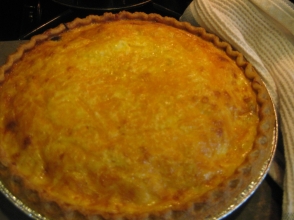 Cool a few minutes (5-10) before cutting into wedges. You might sprinkle a little paprika over the top for color and slight flavor.

Plate quiche wedge alone or with soup or favorite sides (could be veggies like asparagus, roasted squash or sweet potatoes, or bacon or ham) and a green salad.

How good and easy is this? Answer: Very and very. Leftovers aren’t quite as good as the original, but cold or briefly microwaved, they still beat fast food.

Come back every Wednesday for “Southfacin’ cook” at New in NOLA for Patsy’s basics to Southern cooking and eating. Contact her with suggestions, questions or requests at patsy.brumfield@gmail.com.