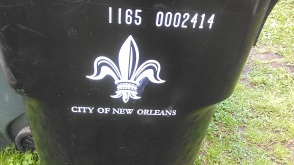 The trash cans in New Orleans have flair. (photo by Carlie Kollath Wells/New in NOLA)

NEW ORLEANS, LA – Today, the City of New Orleans announced there will be no trash or recycling collection on Mardi Gras day, Tuesday, February 12, 2013 for residents with Richards Disposal and Metro Disposal pickup. Those residents will have their trash picked up on Friday, February 15.

Residents serviced by SDT Waste will have regular trash collection on Tuesday.