#NewinNOLA tip: back up at parades when the marching bands come 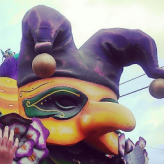 A fellow parade-goer warned us at Mardi Gras to back up when St. Augustine’s marching band was approaching.

“You don’t want a trombone in the face,” he said.

Sure enough, the marching bands take up the entire street and they expect you to move out of the way – not the other way around.

But as soon as the bands pass, you can scoot up to the floats in hopes of getting some better throws (local name for goodies that are thrown from a parade float).

St. Aug’s marching band was everything this Mardi Gras. We saw them in just about every parade. Also, our #newinNOLA tip: back up at parades so you don’t get tromboned in the face. (photo via @newinNOLA on Instagram)