Everybody “down on the Bayou” sings about crawfish pie, but what does it really taste like? Here is a simple recipe, which is a hybrid from Emeril and John Besh.

I also think the pie crust should be pre-cooked slightly before this goes back into the oven.

New Orleans folks have easy access to fresh crawfish, but the rest of us must settled for the frozen variety. The latter is not as gorgeous as fresh, but it easy and accessible. ‘Nuff said.

Crawfish pie makes a great entree with salad or other less spicy side dishes like roasted veggies. I also think it can be converted into impressive appetizers by spraying your muffin tins, shaping pie crust into each and adding the pie filling then browning in the oven 30 minutes or so (the cooking time is less than the full pie, for obvious reasons.) I’d remove the muffin-pies as soon as you can handle them to prevent the crust from steaming and getting too soft.

If you want to make your own pie crust, go for it. I’m buying the dough or prepared pie shells at the grocery store. 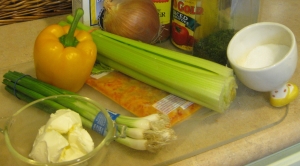 Preheat oven to 350 degrees. When it’s hot, place pie pan with crust onto baking sheet, pour dried beans into the bottom of the crust and cook 10 minutes.

(Usually, when you are going to pre-cook pie crust, you will take a fork and poke lots of little holes into it so that steam can escape and not blow bubbles into your crust. The dried beans serve a similar purpose but prevent the little holes, through which this pie’s juices could leak.)

Remove the pre-cooked crust and set it aside. When it’s cooled off, pour dried beans into a bowl and allow to cool so you can store them for another pie pre-cook.

In the skillet, melt butter then add flour and whisk into a lightly browned roux. I found another recipe that calls for cornstarch to thicken this up at the end, but I don’t like the jelly-like texture. Roux is the way to go. This is the roux I made for crawfish etouffee. Shoot for this color:

Add onions, bell pepper and celery. Cook, stirring, for another 6-8 minutes until vegetables are tender.

Cook another 2-3 minutes until just heated through. Pour into large bowl and let cool about 10 minutes, then pour filling into pie shell.

Bake 40-45 minutes until crust is golden and filling is bubbling hot. Allow to cool 10-15 minutes before serving. Serves 6.

Come back to NewinNOLA.com every week for “Southfacin’ Cook,” where Patsy explains the basics to Southern cooking and eating. Contact her with suggestions, questions or requests at patsy.brumfield@gmail.com.

Good morning from beautiful New Orleans! Hope you are having a fabulous summer so far.

Good morning from beautiful New Orleans! Hope you are having a fabulous summer so far.
%d bloggers like this: