We have massive amounts of Mardi Gras beads in our house.

Our apartment is overflowing with Mardi Gras beads. (photo by Carlie Kollath Wells/New in NOLA)

Beads, plush toys, cups, tridents, doubloons, chips, Muses shoe, Nyx purse. You name it, we got it (except for a coconut). But what do we do with the beads now?

We’ve asked our New Orleans friends and searched Pinterest for ideas. Voila – 24 things to do with Mardi Gras beads.

You could throw your stuff away. We’re not a fan of trashing everything we worked so hard to get, but hey, you wouldn’t be the only ones to do it. In same fashion, you can shove everything in your attic or garage.

One of the post-Mardi Gras options for beads and trinkets – throw them away. (photo by Carlie Kollath Wells/New in NOLA)

We like this option because it quickly removes the clutter from your house. Arc of Greater New Orleans  offers a recycling service for your beads and throws. About Arc:

Buy recycled Mardi Gras beads and throws for less, and do your part to create “green” jobs for people with intellectual disabilities. Join the Arc of GNO and the Sierra Club as we recycle Mardi Gras beads, trinkets, and stuffed animals for the 2013 Carnival Season, and keep them out of the landfills!!

The group sells the beads to krewes. Several places around town have the purple & gold ARC recycling bins. Popular drop-off point – Whole Foods on Magazine Street (Arabella Station store). It’s to the right of the door in the parking area.

We checked it out the other week and it was overflowing with goodies. Muses bags, nice beads and plenty of throws.  For a full list of collection points, call  504-837-5105.

You can recycle your Mardi Gras beads and trinkets at Whole Foods on Magazine Street. (Photo by Carlie Kollath Wells/New in NOLA)

Some people choose to convert their free Mardi Gras goodies into cash. We checked eBay and found several throws from Muses listed. Really want a Muses shoe? Buy one on eBay.

Throw your colorful beads onto tree branches. Some people (us!) love the look, while other people don’t. It’s up to you.

You can decorate your trees with beads. After the parades, kids and merrymakers tossed beads into this tree on Magazine Street in New Orleans. (photo by Carlie Kollath Wells/New in NOLA)

You also can make a mini bead tree inside by filling an empty coffee can with foam or sand and sticking a bare branch in the center. Decorate the branch with beads.

Mardi Gras care packages are perfect for your out-of-state family and friends. They also are good for your New Orleans friends who have moved away. We filled our boxes with beads, cups, chips, doubloons, plush toys and note. These are good to mail after Mardi Gras, or if you want to store them for a year, you can mail them before Mardi Gras next year.

We love this idea from Pinterest. Remember your Mardi Gras adventures every day with magnets on your fridge. Snip the krewe medallions off the beads and hot glue magnets to the back. 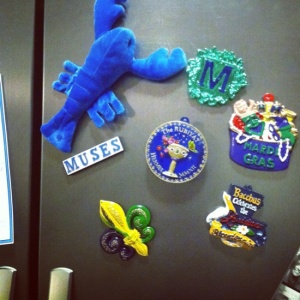 Start with a foam or cardboard cone and glue beads to it. Change your color scheme to fit the appropriate holiday (green for St. Patrick’s, green/gold/purple for Mardi Gras, red & green for Christmas, etc.)

Convert your beads into a tabletop decoration. (photo via Pinterest user lesleye) 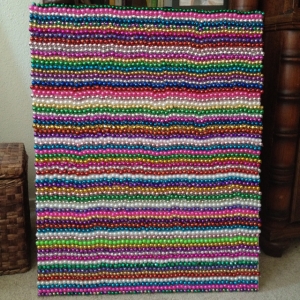 11. Use them in gift-wrapping.

12. Upcycle them into jewelry.

This one on Keetsa is made of beads and men’s ties: 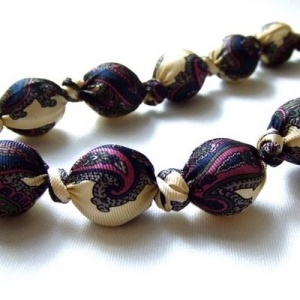 13. Give them to house guests.

We keep a Mardi Gras swag bag in our house. It’s full of beads, cups and plush Mardi Gras throws. When out-of-town visitors stay with us, they are welcome to grab some goodies out of the bag. It’s a nice way to get our guests into the New Orleans spirit, plus we get rid of the extra items.

This is our Mardi Gras swag bag – beads, cups, doubloons and other goodies inside a bag from Bacchus. (photo by Carlie Kollath Wells/NewinNOLA.com)

14. Put them in your costume trunk.

Beads always come in handy. You can reuse them for holidays – St. Patrick’s Day, hello?! – and they make good costume accessories for you and for the kiddos. 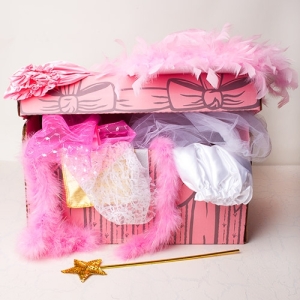 15. Make a nightlight or lamp shades.

Etsy has a few listings for nightlights and lamp shades made out of Mardi Gras beads. Example from SassyCrafter’s shop: 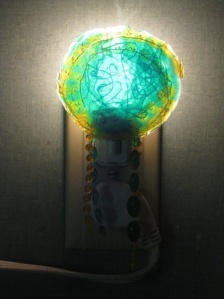 nightlight via SassyCrafter on Etsy

We like color the beads add to this light fixture: 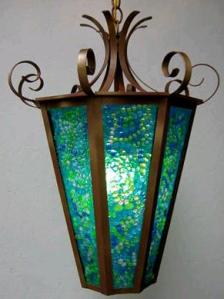 Our cat likes to play with the plush toys. We’ve seen dogs playing with the throws, too.

DollarStoreCrafts.com has instructions for making a chandelier out of beads. Finished product: 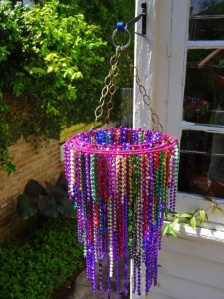 Here’s the step-by-step instructions for the chandelier.

Want to jazz up your existing chandelier? Makelyhome.com has instructions for that.

You can wrap/glue beads around an existing grapevine wreath: 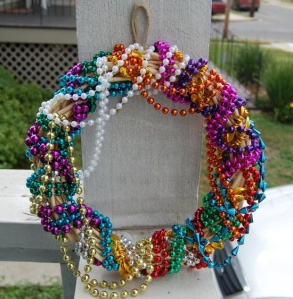 Or you can cover a foam base with beads:

This wreath is for sale on Etsy for $75. It’s in @nolabeadart’s shop.

NOLAbeadart on Etsy made the second wreath. The seller has several other Mardi Gras bead crafts for sale. See the store here. 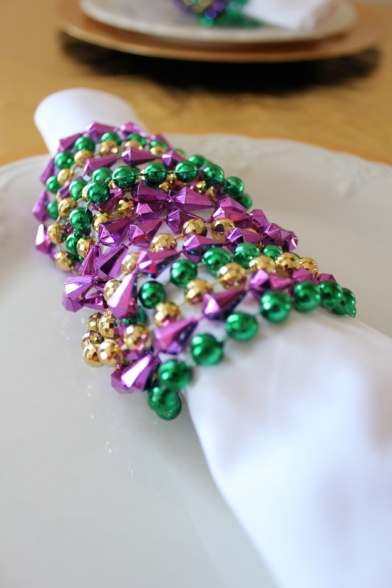 Jazz up your napkins during Mardi Gras. (image via Pinterest user @Lindalou1130)

Upcycle a lamp with beads. (image via Pinterest user @divegoddess316)

21. Decorate a fence or a staircase.

Don’t let your house/apartment/condo be naked during carnival season. If you have a fence, it needs beads. 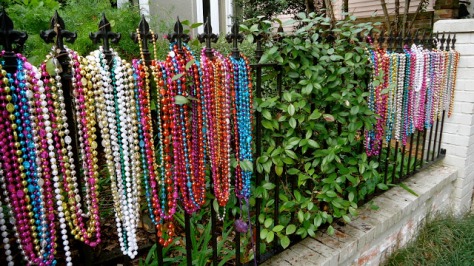 The Visual Vamp blog has several other good ideas for Mardi Gras home decor. Check them out. 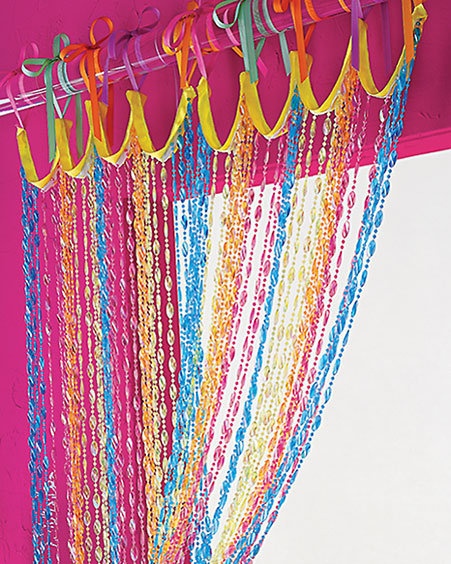 23. Use them as Christmas decorations and ornaments.

24. Join a krewe and throw them to paradegoers next year.

We’ve pinned several more ideas and examples on Pinterest. Check them out.

14 thoughts on “24 things to do with Mardi Gras beads”