Happy Oysters on the Half Shell Day! Really, it’s a holiday. How do you like your bivalves – raw or on the half shell?

Our favorite oyster restaurants in New Orleans so far:

• 50 cent oysters during happy hour at Superior Seafood. This restaurant is right next to the streetcar line at St. Charles and Napoleon. It has nice indoor and outdoor seating. Happy hour is from 4 to 6:30 daily. It also has tasty frozen drinks.

• 25 cent oysters during happy hour at The Blind Pelican on St. Charles Avenue. The special price is offered from 4 p.m. to 8 p.m. every day of the week. You can get a dozen discounted oysters for every regular price drink you get. Charbroiled oysters also are discounted. Casual restaurant with a big porch.

raw oysters at The Blind Pelican on St. Charles (photo by Carlie Kollath Wells/New in NOLA)

• Charbroiled oysters at Drago’s. They aren’t cheap ($19/dozen), but they are oh so good. Several other restaurants offer charbroiled oysters, but Drago’s makes our favorite version. Drago’s has a location downtown inside the Hilton and another location in Metairie near Lakeside Shopping Center. 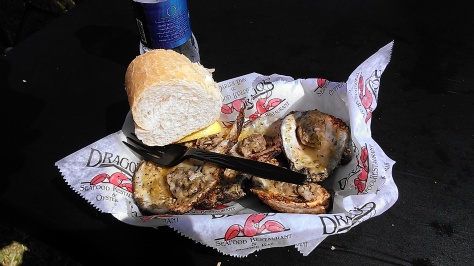 • Raw oysters from Casamento’s on Magazine Street. This old school oyster bar has charm. It’s cash only and has odd hours. Our favorite way to enjoy oysters here – mosey up to the oyster bar, get a dozen and ask for the shucker’s special cocktail sauce. Yum.

• 50 cent oysters at Luke during happy hour. Plus, it is a John Besh restaurant so you are guaranteed tasty food and fresh seafood. Happy hour is Monday – Friday from 3 to 6 p.m.  (more happy hour suggestions) 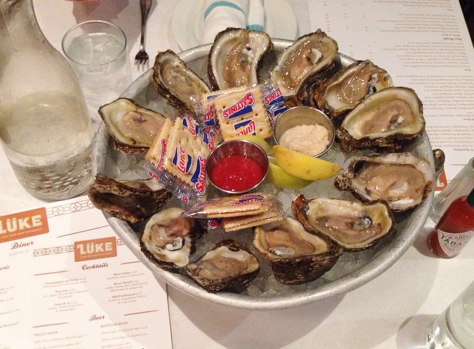 More places to get oysters on the half shell:

– Cooter Brown’s – in the Riverbend off St. Charles. The tavern also has an extensive beer list.

– Pascal’s Manale – this Italian restaurant on Napoleon Avenue celebrated its 100th birthday in 2013, a sure sign it is doing something right. Along with its oyster bar, it’s known for its bbq shrimp.

And don’t forget about the New Orleans Oyster Festival. Free admission and every oyster dish you could possibly want. It’s scheduled for May 31 – June 1 this year. Check out our photos from last year. 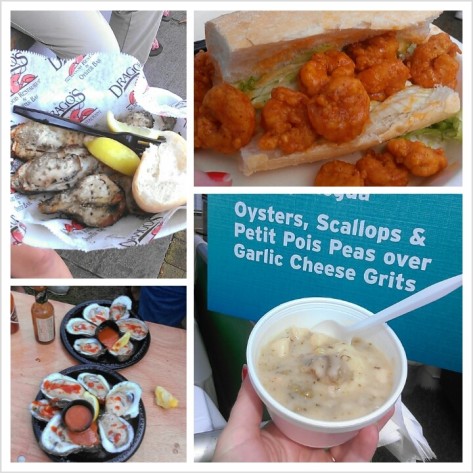 The Oyster Fest serves up all sorts of bivalve goodness. Here are some of eats in 2013. (photos by Carlie Kollath Wells/New in NOLA)

There are plenty of other places in New Orleans to get oysters. Where do you go? Tell us in the comments.