Planning to run with the (roller) bulls in New Orleans? Prepare yourself for a wildly fun morning. This year’s event is Saturday, July 12, 2014, at 8 a.m. sharp. Seriously, don’t be late or you are going to miss the event. This NOLA event actually starts on time.

Hundreds of roller derby women (bulls) chase thousands of runners through a short course in the CBD and Warehouse District. The bulls have wiffle bats and spank runners during the race. The event raises money for the Animal Rescue New Orleans and the Louisiana Chapter of the National Multiple Sclerosis Society.

We ran with the bulls last year and had a blast. We’ll be there again Saturday with our Meetup friends. We’d love for you to join us.

Advice if you are a first-time runner this year:

–  HOW MUCH: It’s $12 to run. The fee gets you a running number and access to the inside venue (AC, chairs, bathrooms, music, pay-as-you-eat food). You can preregister for a number, but we were able to do it the day of the race. You can watch from the route for free.

– WHAT TO WEAR: The runners wear white and red. The outfits vary but the most popular outfits are white shirts and white shorts/pants with a red bandana tied around your neck and a red sash around your waist. We saw white shirts paired with khakis and jeans too. We also saw bullfighter costumes, white dresses, white/red tutus, capes, sombreros, “Where’s Waldo”-style outfits and guys in boxers. The key is to focus on red and white clothing and accessories. 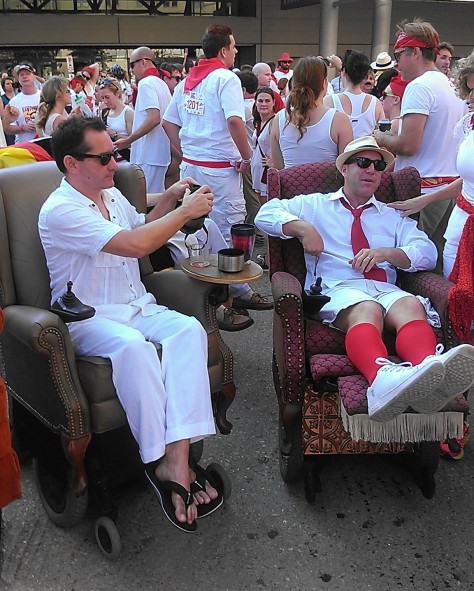 – WHERE: The race starts at The Sugar Mill (1021 Convention Center Boulevard), directly across from the Ernest N. Morial Convention Center near the Mississippi River in the Warehouse District. We parked in a convention center lot ($10 all day – cash only). There’s some free street parking available nearby in the CBD but it is limited. The route for 2014:

The 2014 route is a little less than a mile. (image via nolabulls.com)

– CASH ONLY: Everything is cash only at the race.  There was an ATM available but it charged a $5 service fee, on top of whatever your bank charges. Food, drinks and beer are for sale. Several food trucks are there before and after the race with food for sale.

– MORE OF A JOG: The race is less than a mile (route). We walked the majority of the way and jogged only when the “bulls” were around. There were so many people (organizers say at least 10,000 people), we couldn’t have run the whole thing if we wanted to. The focus is on having fun, not the racing part. We didn’t see anyone trying to haul butt to the end. However, dress appropriately for running (shoes & sports bras) so you can dash if you need to.

– HOW HARD DO THEY HIT: Roller derby women wear horns and play the role of the bulls. They have plastic, wiffle-type bats they use to bop the runners on the butt. Most of the taps were playful and didn’t hurt at all. However, some of the rollerbulls were bopping people hard. And, we noticed the bulls went after guys more than women. Antagonize them and you’ll get hit more often and with more force. 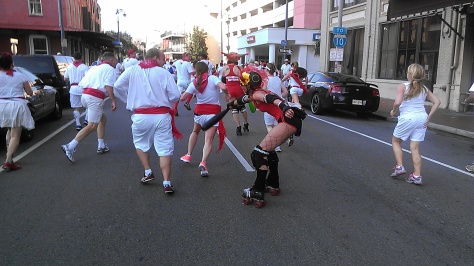 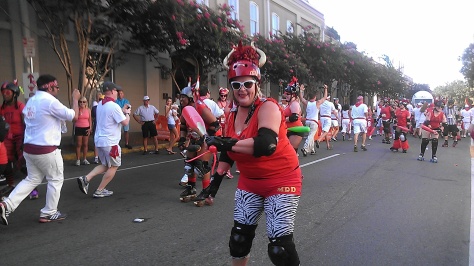 – WHEN TO ARRIVE: Arrive around 7 a.m. You’ll be able to see everyone’s costumes, take pictures, do your registration and hit up the food trucks. Plus, you can nab a prime spot for the procession of San Fermin (more) at 7:15 a.m.

– The run starts at 8 a.m. We didn’t hear an official start, but we saw everyone else going and joined the crowd. There were cameras everywhere so prepare to smile for the paparazzi. And the rollerbulls were great about posing for pictures with and without runners.

– We were done around 9 a.m. and the street turned into a dance party before the NOPD cleared everyone into the main event space. After the race, the bulls have a costume contest in the Sugar Mill. It’s free to watch if you have a registration wristband.

Two hashtags if you are out posting photos: #nolabulls #sfno2014. Plus, the NOLA Bulls are on Twitter and Instagram. 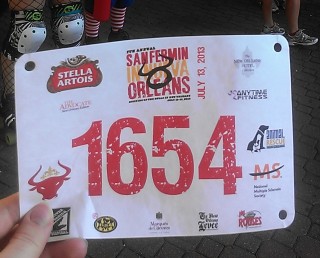 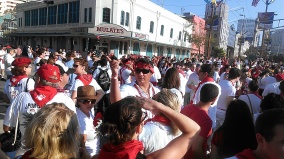 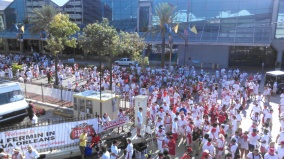 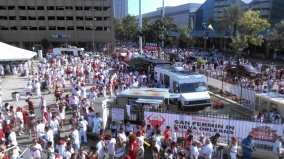 One thought on “Running with the Bulls in New Orleans: Advice for first timers”