Hope you survived Mardi Gras. You probably have a house full of glitter and beads now. We sure do. Before you throw away your loot, consider your other options, such as DIY projects and recycling. 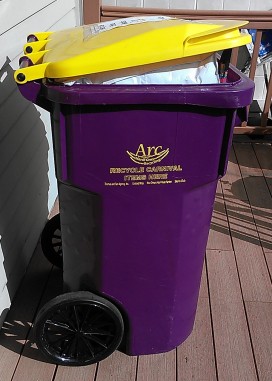 Looks for these purple and gold bead recycling bins around the metro area. Arc of New Orleans will recycle your Mardi Gras beads and throws. (photo by Carlie Kollath Wells/New in NOLA)

Mardi Gras beads are a good way to add some flair to your house. One of our favorite DIY bead projects – medallion magnets. See that idea plus 23 other creative things to do with Mardi Gras beads here.

Look for the purple and gold Arc bins at these locations:

@NewInNOLA If you recycle beads at the Main Library you can feed the Bead Gator! He’s so hungry for beads. pic.twitter.com/reRiEB8Tpz